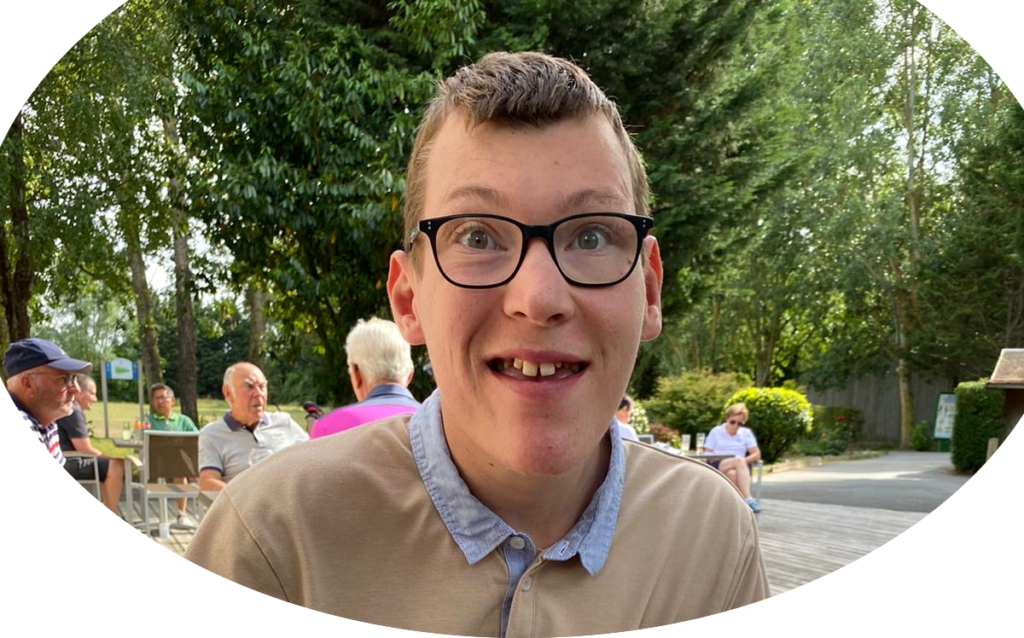 A burning desire to communicate, come what may

Paul is 24 years old, and for all 24, a burning desire to communicate with others has been the fire in his soul. Doctors thought he would never learn to speak, but today, he speaks a great deal… perhaps too great a deal at times! It’s his way of making up for lost ground, ground lost for the great many difficulties he has had to overcome to grow, nurture, and maintain communication with his entourage along the way.

Because communication, it’s vital. Even more so for Paul, who, despite his early difficulties, had displayed a great desire to explain things from a very young age. At the age of 2, his first behavioural problems appeared, and these coincided with a general developmental retardation. While no diagnosis was given, Paul would begin to develop his own gesturality. His mum thus decided to train herself in Makaton (with signs from French Sign Language). For Paul, the lightswitch had been pulled: he had finally found an efficient way to express what he wanted and interact with others. His first sign would be “sausage”! Thanks to language skills he would gradually develop from Makaton, his behavioural problems would be significantly reduced. Now, he could express his emotions, and the cause of his joys or pains.

After a short stint in a medico-educational institute, Paul joined the Centre Daviel pour enfants polyhandicapés in Paris. He was 8 years old, and this was the first time that a team of professionals was able to understand Paul – not only insofar as concerned his disability, but also insofar as concerned the skills concealed behind his difficulties communicating. The need to interact and the motivation to work were Paul’s undeniable driving forces, as if he had all his years of incomprehension and frustration to catch up on. His progress was substantial.

Meanwhile, Paul’s diagnosis would become clearer, though not always elucidating: Paul suffers from a rare illness marked by a chromosomal abnormality, the microdeletion on the long arm of Chromosome 16. In concrete terms, this translates into complex language disorders preventing the natural emergence of speech, combined with dyspraxia, intellectual impairment, epilepsy, and neurovisual and motor disorders.

At 14 years of age, Paul was forced to leave the Centre Daviel because their age groups only go so far as adolescence. His parents thus chose a new institution. For lack of space or for lack of appropriate care structures, the choice defaulted onto a Centre pour jeunes sourds (Centre for deaf young people). This, despite the fact that Paul was not deaf himself, and, quite the opposite, suffered from hyperacusis. A first break in his developmental course thus occurred. The Centre Robert Laplane was thus solicited, in order to, among other things, support his parents in re-establishing contact with Paul’s original orthoptist, who had too hastily concluded that rehabilitation was not possible for his particular visual impairments.

A few years later, on the threshold of his 20th birthday, the regretful observation was made that his priorly developed communication tools were regressing, and that a large number of them were being lost. This was explained by the insufficiency of the training given to his care professionals, which, while certainly well-intentioned, was insufficiently specific to his needs.

At 20, leaving the establishment for deaf people, his parents had a new decision to make – a decision whose only guiding factor was an absence of choice caused by the lack of facilities able to support Paul effectively. A second break in his trajectory thus occurred upon his entry to the adult centre, a break which coincided with the loss of yet more of his recourses and tools – where those already gone needed replacing – with professionals only minorly trained to support people with profiles such as Paul’s.

But, today, at 24 years old, Paul is a happy, charming, highly sociable young man, who above all enjoys being surrounded by friends, talking and joking. “Communication at all costs” is his motto; and he owes it to his and his whole family’s fight to maintain communication, an essential in life, however it takes shape. Introducing alternative communication tools is vital for all children without access to or not accessing language. The Centre de ressources Robert Laplane team has been committed, since its foundation roughly 20 years ago, to bringing its expertise to care professionals to transmit approaches and communication tools adapted to the needs of children and adults in its target demographic.