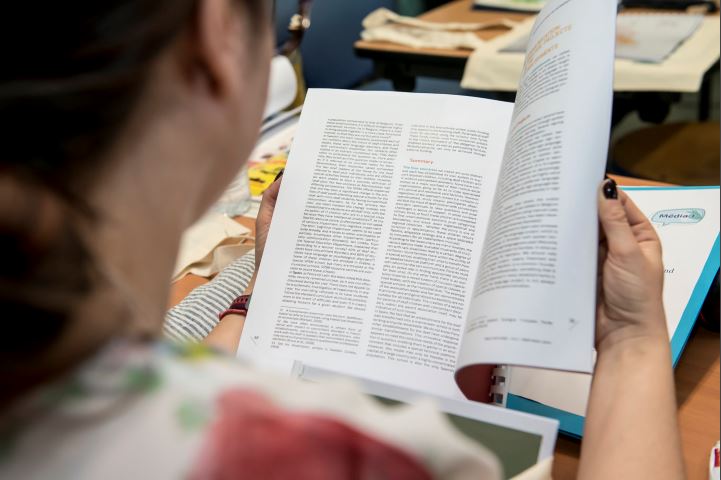 This account is taken from the proceedings of the “stakeholder cooperation issues and challenges in the Dispositif intégré handicaps rares” symposium, on 12th of January 2016 in Paris, co-organised by the CNSA and GNCHR.

“Valérie Antoniolli, of the CROP Paul Bouvier, has known Élisabeth Lasserre and the Centre de ressources Robert Laplane ever since her experience in a specialised team for deaf children in French Guiana. There, she could see the benefits of the Centre de ressources’ intervention on the children, teams, and families too. When she came to Nîmes, to the CROP Paul Bouvier, in 2008, she assessed the needs of children with particularly complex profiles and, logically, thought to call the Centre de ressources. She then began a gradual initiative of raising awareness about Centre’s work among the team in place, as it is not always easy to accept the idea of being helped by outsiders.

To do this, she called on the skills she acquired in Guyana thanks to the Centre Robert Laplane: she began to make the teams think differently, to consider the child not just in their deafness but more so in their overall wellbeing. She introduced a set of new approaches, including pictogram-based communication and investigations into neurovisual disorders and into posture, to make them “dig deeper” for solutions. The CROP’s manager fully adhered to her vision, and this helped things along.

In 2011, a partnership agreement was signed with the Centre de ressources, in the Nîmes area, which included many children with associated disorders or rare disabilities, to begin with. The CROP, however, also intervened in a much wider area in the south of France spanning from Béziers to Orange over the Cévennes. Over five years of partnership, activities were led on many fronts, but these shared the common objective of developing the skills sets of professionals. Eventually, the Centre de ressources would become part of the training programme.

Valérie Antoniolli pointed out that the CROP team had never really been in the position of an apprentice learning a master’s trade. It was, rather, more of a mutual training-in-action set-up involving the intense participation of all parties. Moreover, the field professionals prepared for the arrival of the Centre de ressources: summary sheets were made to facilitate the asking of questions; and videos were shown and analysed. They studied what worked well or less well, and then the team found ways forward regarding the children’s needs.

Today, Valérie Antoniolli noted that the team’s field professionals have adopted this overall consideration of the child: professionals are no longer solely concerned with their discipline alone; they have shared aims and ambitions. She concluded with her cross-disciplinary role in the training she delivers teams in other regions. Of the four regions in question, three have been trained or educated. The fourth is in high demand. To this day, around thirty children have benefited from interventions from the Centre de ressources Robert Laplane.”