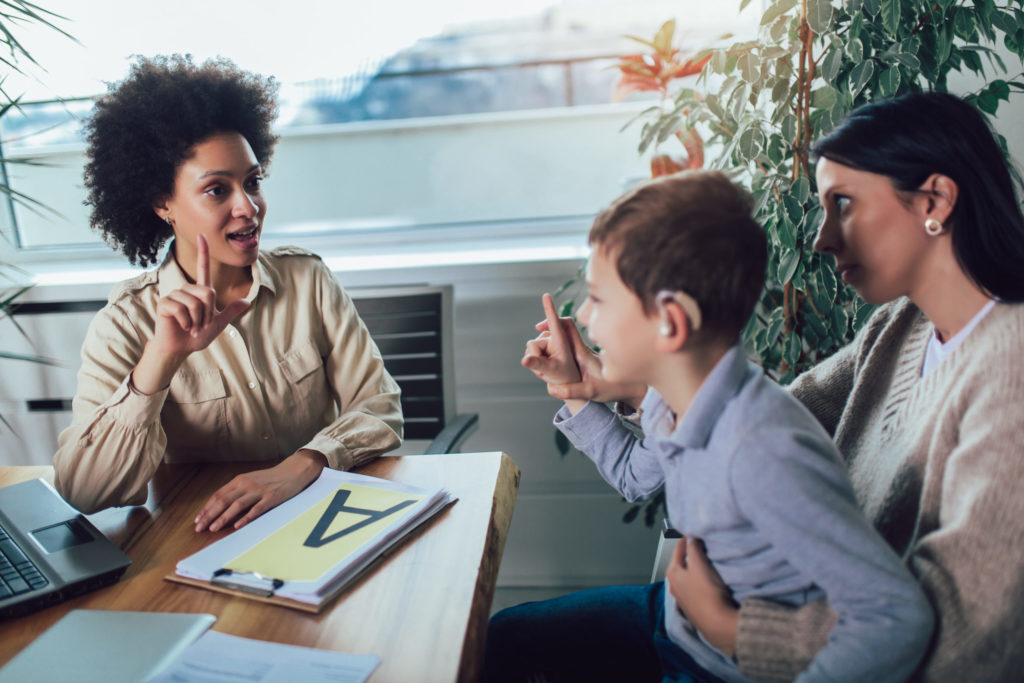 More often than not, professionals in the field of hearing impairment call upon the Centre national de ressources Robert Laplane for deaf children presenting complex language disorders or learning difficulties not explained by their deafness alone. Their overall development is complicated by damage to their sensorial, cognitive or motor functions. We are also solicited on behalf of deaf children whose disability presents particularly complex challenges within an establishment not specialised in deafness.

The deaf or hearing people for whom we intervene have the common trait of significant communication difficulties. They can thus find themselves isolated, excluded, and in significant physical pain, due to the lack of training among the people around them, and to the lack of places appropriate to their disability within institutions for adults.

Our responsibility regarding these people is to better understand their needs in order to help the professionals around them in their search for a way forward and for appropriate solutions.

Hearing impairments are high in frequency: roughly one case of congenital deafness per 1,000 births, and the same proportion for acquired causes. They can take on a very wide range of clinical aspects and can arise at any point in a person’s life. The difficulties are not the same if the deafness occurs before, during, or after the ‘sensitive period’ of language acquisition. In the majority of cases, the deafness is isolated. Nonetheless, it can form part of a more complex pathological framework and thus be in combination with other impairments and/or various disorders.

Everyone is familiar with the role that hearing plays in language acquisition and child development. The earlier the damage to hearing, the greater the risk to the child in these areas, and the more a rapid intervention is required. The child learns to counterbalance their hearing loss through other channels: they bring other processing systems into play and find unique ways of communicating spontaneously. The occurrence of any other impairment associated with their deafness makes this task much more difficult. This is the case for roughly 20 to 25% of instances. These additional impairments are diverse: both in nature and in expression. Combined with deafness, their effects are potentiated and worsen synergistically.

Each combination of disabilities induces its own challenges. These challenges are likely to vary according to various factors which should always be taken into consideration:

A number of combinations may be encountered. Certain impairments conceal deafness while others are concealed by deafness. Problems surrounding diagnosis are always complex and are staggered over time.

Whatever the combination causing them, major difficulties in the child’s access to information are often the effect. The earlier these problems occur, the more they influence the child’s development and their way of life.

The Centre de ressources Robert Laplane has elaborated a system to classify cases of rare disability over the course of its diagnostic and research roles regarding these impairments.

Roughly 1,500 cases were studied, this being a large enough sample group for the identification of cluster groups. We put this forward as a template for reflection on the different types of questions raised by diagnosis and treatment.

REGARDING THE EVOLUTION OF THE IMPAIRMENTS OVER TIME : 3 MAINS TYPES OF SITUATION

This category concerns, in particular, disorders of a neurological origin affecting all major functions and instrumental and/or cognitive problems. This progressive materialisation is explained by the slow maturation of brain functions and by the often deceptive appearance of these disorders, which, moreover, tend to be concealed by deafness.

These are the result of progressive conditions or accidental traumas of some nature. Within the framework of progressive conditions, such as mitochondrial cytopathy, deafness can occur later on, and worsen in stages. It is the same case for many different disorders likely to occur. The disorders are established according to their own chronology. They evolve independently of each other, on their own account, and the disorders are not worsened simultaneously. As a result, the challenges of the disability are constantly changing.

AT THE FUNCTIONAL LEVEL : 2 MAINS TYPES OF ASSOCIATED IMPAIRMENT

These concern the overall motricity of the body, as well as manual motricity, ocular motricity, and speech motricity. A number of systems may be affected simultaneously, which limits the person’s means of action and expression and reduces, in a more or less evident way, their ability to interact with their human and physical environment.

OUR EXPERTISE: WHO DOES IT BENEFIT?